🌩 Bazza shouts at a cloud shaped like Chairman Gao

I am fucking right though, clappers need to be worried as we’re shite and our squad is shite.

Have faith in Gao?

Fucked if I do.

I have complete faith in Gao doing what he/the club on his behalf, said they would do. Live within their means, be self sufficient and promote youth team players. “Business as usual” as was said at the time of the (rather admittedly pointless) takeover.

We’d be foolish to think otherwise.

You don’t have to like it but that’s where we are at in the great footballing pyramid and the grand scheme of things.

I’m personally looking forward to a full season of Ralph and the possibility of him getting in a few players more in his mould, in the summer. They’ll be young but hungry. They’ll run around a lot. They’ll have a team-first mentality. I don’t see Ralph having it any other way.

Reasons to be cheerful.

Indeed. Whatever happens you can guarantee that Barry will bitch and moan and have us relegated at Christmas. Again.

we will utilise the U23 team and be a champions league position by Christmas.

I’m guessing Baz wishes we had the Manure recruitment strategy

Spunking 100 odd mil on Pogba worked well for them

Apparently what he wants is a mix of younger players with a few experienced pros. You know, like we already have. 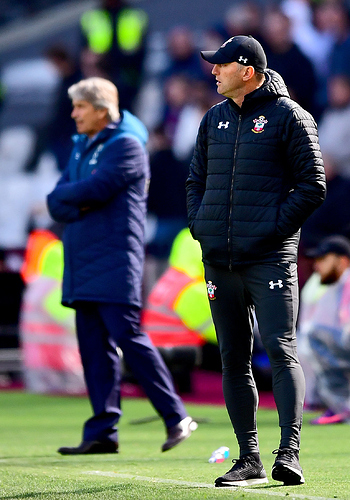 Hasenhuttl has sympathy with Forster and Elyounoussi after defeat

“We know we have to do a lot of things in the summer to get better and also bring new players in, for sure.

“I can guarantee you that this game only gives us a true picture.”

Most important word in that interview is “WE”.

Perhaps reworded to people aren’t as upset about life, the universe & everything as Baz is…

I fought the bore and the bore won

Right, I predict that over the summer we might need a place for Bazza (and perhaps others) to shout about Gao, the club, and everything for that matter.

So I thought I’d set out the case for the defence (despite the fact that I have concerns and reservations myself).

So here it is.

What I really love about watching your reactions over the last several shit years in the wilderness is just how you are never satisfied, @Barry-Sanchez.

Oh, and just how fucking wrong your predictions seem to be.

You’ve had us relegated or in administration every year for, well for as long as I can remember. We’re not. We’ve come close but faith and good fortune have kept us up and trading.

You’ve lambasted JWP (and our youth policy by extension) for years, only to now have him as your player of the season. How did you get that so wrong?

You’ve told us how our central defenders aren’t good enough and how this will mean that we’ll be relegated. They might not be good enough, but we weren’t relegated.

You’ve constantly told us that Redmond would never be good enough, only to have him as your most improved player of the season. Who’d have thought he just needed enough time and a manager that could get the best out of him? How’d you get that so wrong?

You told us that Ralph Krueger needed to go. He’s gone. Still not satisfied.

You told us that Les Reed had to go. He’s gone. Still not satisfied.

You told us that in recent years most of our managers were shit, and you’ve had your wish and we’ve replaced them. Most of the time it didn’t work out, but now we’ve got a good one. You’re still not satisfied - telling us that he won’t stay.

When will you be satisfied…do you think?

I’m not suggesting that the rest of us should be pin-up boys (or girls or people or whatever…) for you in our approach to being a fan.

I see many others on here, including myself, who have been spectacularly wrong about things related to SFC. But I don’t see anyone else who fails to admit their mistakes or who fails to see the massive positives that exist around our club right now.

You’ve told us that Gao needs to go.

This, despite the fact that under his ownership, the club has granted your wishes about Reed and Krueger.

He replaced Kat Liebherr who you seemed to have a problem with.

He’s got in a manager that you seem to be happy with.

He’s improved players you’ve hated for years - such that they now feature positively in your review of the year.

He’s allowed us to blood youth players without getting relegated.

He’s given us excitement and hope for the future.

Aside from putting billions into the club, he’s granted most wishes that you (and I) have had for the club, and even though he’s sanctioned investment (albeit poorly executed by Reed and Krueger - now gone) you’re still not satisfied.

Come on in, the water’s lovely

So Bazza, when are you going to put a smile on your face and recognise how positive things are at the club right now?

Wow, I got a semi reading that Bletch… which at my age in life is a lot more remarkable than it sounds

Fuck that Gao is a parasite, big Kat is an opportunist and we haven’t improved in 3 years.

Wow, I got a semi reading that Bletch… which at my age in life is a lot more remarkable than it sounds

As long as it’s not a semi-colon* then all is good.

*A semi-colon, also known as the Grand Old Duke of Pork, is well-known to be where something has only been partially inserted into something else.

haha, we’ve improved massively in the last 5 months compared to the previous 18 months (maybe more). I guess your response to this will be ‘look at the West Ham game’

We could be Leeds…spent a shite load of OPM chasing the dream and are now so shite scared of coming back up, Linda Lovelace looks like a role model!

The squad hasn’t, we signed Hassenhutl who is brilliant, if he goes we’re screwed, will he stay if he doesn’t get the backing?
Its a sell to buy policy which means we have to sell quite obviously our worst players and retain our best ones, after the West Ham game who do you think they’ll be buying?

if he goes we’re screwed, will he stay if he doesn’t get the backing?

All speculation/conjecture/paranoia call it what you want but that hasn’t happened, you said we haven’t improved, we have a better manager that has us playing better football, scoring more goals and a win % around 40%, that is fucking improvement Baz