Robertson doing his best to emulate the other antipodean snooker player, Eddie Charlton. Never seen a modern player take so painfully long over his shots, terrible to watch.

Just took over 4 minutes on his last shot, half hearted apology to Trump.

Half an hour gone, four reds potted so far. Sod this, I’m going to bed. Probably catch the last couple of shots when I wake up in the morning, at this rate they’ll still be playing

Robertson ground out the win eventually, if I’d watched any more I’d have lost the will to live.

I stuck it out to the end, they really ground out that last frame with lucky snookers and bad misses.

Trump missed the last, easyish, pink to give Robertson the frame and the victory.

Fair play to you. I assume caffeine was involved.

Surprisingly not, a small snifter of Whiskey might have been imbibed though…

In that case, I’m astonished that you retained consciousness. 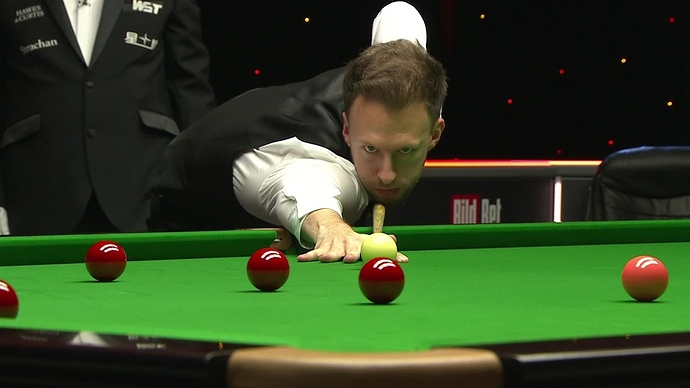 Judd Trump and Jack Lisowski will become the first snooker players in over a quarter of a century to contest successive ranking finals at the German Masters.

Quite astonishing stun shot off the cushion from Trump. I’m not sure Alex would have tried this one.

Anyone else watch Higgins beat Zhao last night? Really strange end to the match. Higgins steamed back from the dead, Zhao lost all confidence. But those last two frames, I swear he didn’t realise he could ask Higgins to try again after failing to escape from a snooker. Especially the last one, he needed three snookers,laid an absolute corker which Higgins missed. So the obvious thing to do was put him back in. Instead, he took on a very difficult shot and tried to lay another snooker as if he didn’t know he could just make him play it again from the same position. Very strange.

I once serenaded the missus in bed with “Snooker Loopy” in the style of William Shatner.

I got kicked out of bed.

In my day I was a master at pocket billiards…honest.

I’m now genuinely confused about this. Opening frame of O’Sullivan vs Williams, 2 snookers required. Gets one, a beauty, Williams misses the blue from the snooker. Instead of having the cue ball replaced, O’Sullivan plays from where it was left, very difficult position to lay another snooker from, fails to do so and leaves a straightforward blue for Williams to clinch the frame.

Have the rules changed recently? Replacing the white and making Williams replay the shot would very likely have won O’Sullivan the frame. It’s commonly done, I don’t get why in two games running two pro players have declined to do it and lost out as a result.

I think they can only replace the white if the referee calls a miss, I may be wrong

Essentially the player has to attempt to hit the ball whether they are snookered or not. If the target ball is missed by the player then the referee calls ‘foul and a miss’ and the shot is replayed if the opposition player chooses it.

According to the sport’s official rule book: “A miss is when the cue ball fails to first contact a ball on and the referee considers that the striker has not made a good enough attempt to hit a ball on.”

I think you’re right. What’s throwing me is that refs always called a miss if a player didn’t escape from a relatively simple snooker, and erred on the side of safety. They seem to have stopped calling the miss now,either of the ones I mentioned should have been straightforward for a pro to hit unless they didn’t wish to for tactical reasons. In the past,they would have been called as a miss.

Yeah, I’ve been looking around to see if they’ve relaxed the miss rule, which is entirely up to the referee’s discretion, and I can’t see anything.

Wait 'til Mike Dean becomes a snooker ref, even then I doubt if he’ll be able to keep up with play.

Brilliant match between Ronnie and Wiilliams tonight, just come down to a final frame shootout…

Notice that at least twice the ref called a miss after a snooker? Neither of those were any harder to escape from than the ones I mentioned in the other two games, I can’t understand it. Ronnie put Mark Williams back in position three times on one of them.

I’m somewhat disappointed that no-one has started a Kickstarter to get my version of Snooker Loopy into the charts.