I’ve been pondering this thread for some time, but held back because for a time, the rest of the world managed to hold back too, particularly after the Iranian nuclear deal brokered during Obama’s tenure as US President.

Trump is a different ball game. Heavily influenced by elements of the Israeli government and lobby, creating worse relations with Iran was something that was always on his to-do list. He campaigned on it, calling the Obama deal the “worst deal in history”. I’m sure any graduates of Trump University would disagree.

There are some elements of the US Administration that have never gotten over the 1979 revolution in Iran. Before then, everything regarding Western interests was nice and cushty. A friendly dictator of the West’s choice in charge since the democratically elected Prime Minister was deposed in a 1953 Anglo-US coup, only to be replaced with a militant theocracy that was inherently opposed to anything the West might have been interested in.

The real shame is that if we’d just left alone in 1953, we could have got the same outcomes in terms of access to resources, and Iran might be a mature democracy today. As things stand, it’s a mature revolutionary state and a permanent reminder that the US doesn’t always get its own way.

Depressingly, it looks like it is back on, and another war of aggression is on the way. I suppose we need a place to discuss it. 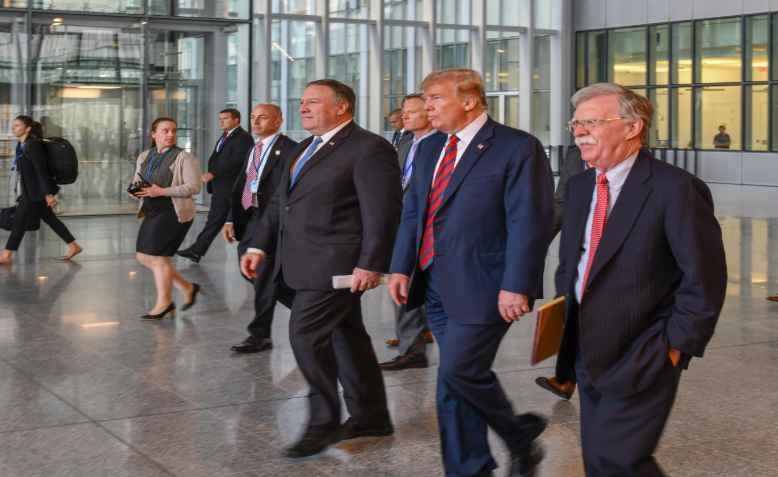 Trump and Iran: the brink of war

Trump, John Bolton and Mike Pompeo have created a situation with Iran that is risking a new war in the Middle East, argues Chris Nineham

What can Trump really do? He can’t invade politically or geographically and he has sanctioned the shit out of the place, there’s not much he can do.

Iran(under a different name) was mature long before anywhere in the West. Even ancient Greece, by about 3500 years.
Agree with the rest and so am left wondering how this will play out. As @Barry-Sanchez says, what can the murderous bastards do, they’ve killed all the civilians they’re going to with their economic warfare.
That won’t work on intelligent people(and the Iranian people are) that remember war waged against them by the very same evil bastards.
The west(USoWH & poddles) can’t survive a week if the straights close(our addiction to energy is all encompassing) so it would have to be a fucking massive operation and that’s before you add in moves from Russia(ally) and China(how much oil are they dependent on from Iran?).
My money is on China sorting this one out before Russia proves how superior their weapon systems are. America needs China and China need Iran.
Of course you can forget all logic when you look at the wests record and who now runs the man that runs the show(for public consumption only of course).
Except to go nuclear within the month

Maybe this is why the USofA has been supporting regime change in Venezuela- The quality of the oil there may be poor but it all refines and cheaper to ship.

I won’t go into opinions on this one, just a few basics.
Iran believes that the Saudis are unfit to be the custodians of the holy sites of Islam. Call it a culture clash between Shia & Sunni doctrines or politics.
So, while the closeness of Trump and Israel is already mentioned in Pap’s post, remember that Trump & Saudi are also close (Kashoggi not withstanding).
So in any debate on this, never underestimate that strangely, Saudi & Israel are kind of on the same side here.

A stupid blow out with Iran was always buried deep in the back of my mind while I was down there, 1 UK Frigate in the Armilla patrol wont be much help and the penchant for putting missiles under the nets of fishing boats instead of Mk 1 Landcruisers puts Capital ships at risk. My back of mind always had a what if nag in there. Driving into the desert won’t work with 45C temperatures so it was always go on sick leave asap.
I wouldn’t be looking at Skyscanner just yet if I was still there.
But I’d be thinking about it a bit.

There is a civil war in Islam but it is never brought up.

There is no way the US could invade, it’d make Iraq seem easy and they’d never leave if they went in, just another tinpot religious nation that wants its citizens in the backwaters, similar to Trump I suppose.

Technically incorrect as a civil war is between different groups within the same country, but don’t let me stop you.

Luckily I got here before @Fowllyd

Yes technically, but you understand the same, they’re at odds over ideology, the US, Russia and China to a lesser degree are using them for a proxy war, its always happening.

Infighting probably more the correct word, much like the infighting between Christian ideologies. I would add but more bloody but we’ve all seen N Ireland.

Northern Ireland is nothing to do with religion.

A non invasion war would be a bigger disaster than a straight invasion. Iran would fire off missiles bombs and “ground based terrorists” at US interests across the Gulf. Military facilities in Qatar, UAE, Bahrain would all be prime targets and attacks would lack “precision” guided weapons. The airbase in Dubai for example is in the City limits.
Add to that Oil will stop flowing, we had ships being sunk in the Straits of Hormuz decades ago. They dont have to hit every ship just one. The lack of oil would wreck the global economy in weeks. 3 day week again.
It is just dumb.

And as this piece points out, this is basically a game of poker now.

BBC News - Is the United States heading for war with Iran? 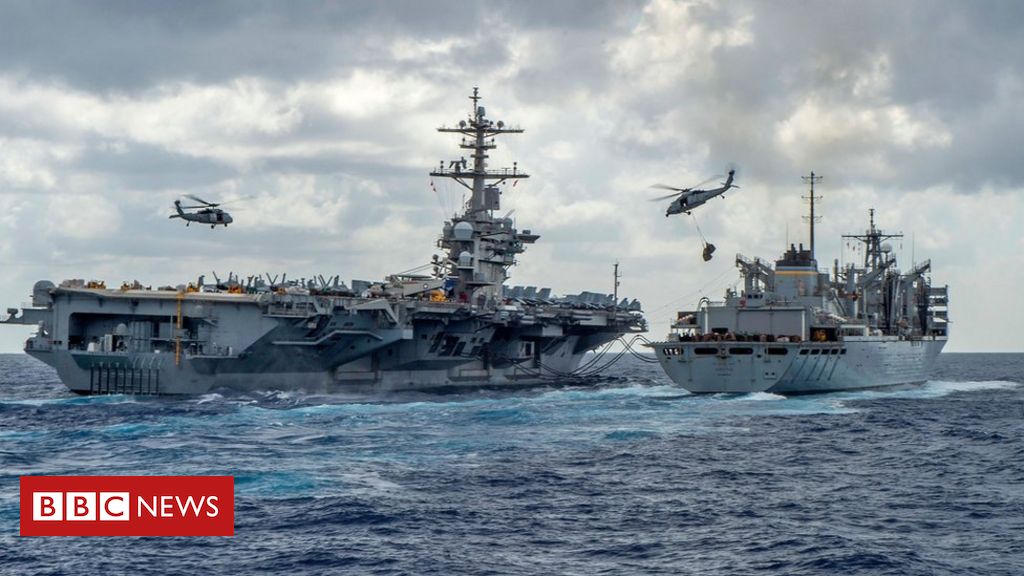 Is the United States heading for war with Iran?

A conflict is more likely today than at any time since President Donald Trump took office.

A non invasion war would be a bigger disaster than a straight invasion.

Have we not been living this for a long time already. At least from an Iranian view point? Sanctions on medical essentials and the like are a very deliberate form of warfare against civilians.

Iran would fire off missiles bombs and “ground based terrorists” at US interests across the Gulf. Military facilities in Qatar, UAE, Bahrain would all be prime targets and attacks would lack “precision” guided weapons. The airbase in Dubai for example is in the City limits

I disagree with this. Iran is a nation that can build nuclear. Don’t believe the lies that they can’t fire straight(they’re close to being on par with the west, but behind China and well behind Russia(them two will swap very soon)). And also remember everything Iran does will be defensive. They will never be the aggressor in this potential murderous idiocy.

Add to that Oil will stop flowing, we had ships being sunk in the Straits of Hormuz decades ago. They dont have to hit every ship just one. The lack of oil would wreck the global economy in weeks. 3 day week again.
It is just dumb.

Yes to all of this, except(as stated above) they’ll hit them all if they want(do they operate the Russian system?).
Was this the real rush to secure Venezuela?

Haven’t read the bbc article, but isn’t it more, victim not willing to supplicate, so bully gets more demented, rather than a benign game of cards?
The gangster states have no lie to hide behind, as their plan was revealed years ago. Unless they heavily censor the whole Internet, their lie is exposed the minute it starts. That’s not appealing for them either way, so should we expect another passenger plane to be shot down, or something worse?

The article was mainly about power plays in Washington & how far Iran want to pull John Bolton’s tail and how they COULD take their stirring too far.

And no, Iran won’t launch a first shot, they aren’t stupid

I’ll have a read(been a longtime since i bothered with BBC).
Agree that Iran would never be the aggressor, so knowing what we know, how far do you think the US will go to create their excuse for going into open violence mode(do they even bother shooting down innocents as a pretext anymore), or will they step back?
I still feel China, despite Russia’s obvious influence, will decide the outcome of this latest act of aggression. Don’t know the figures, but they buy a fair bit of oil from Iran and they know Washingtons desire(and attempts) to stop BRI. They won’t stay silent forever.
They’re well equipped, have the capacity and people, plus they now probably own our club, so a true force on the world stage

Are you genuinely saying the US military is behind the Russians and Chinese and the Iranians are close to being on a par with the West?

On what evidence are you coming to this conclusion?

Reread my comment. I was talking about firing straight and hitting the correct target.
If they have the Russian S400 system they’re years ahead of the aggressor.

Some around the edges stuff in this tweet.
Yes it starts by ai.ing at Man City but goes deeper into Saudi/UAE Politics.
Back story, not directly relevant but shows the links to Trump A document marked “strictly private and confidential” lays out a plan to manipulate markets and short Qatar.

Iran is not Iraq.Eighty million people, and with other superpowers interested in retaining their links to it.

People don’t see it, but we’ve effectively had US unilateralism in the West since the end of the Second World War, with some notable exceptions such as Vietnam.

Is Iran going to be the straw that breaks the camel’s back on that front?

No, the US wouldn’t invade, there’s only one way in, Iran is surrounded by mountains, they know this hence they’re bolshie as fuck, the Russians and Chinese are interested for their own interests and not there for the sake of World peace, its sabre rattling, nothing more nothing less.