💰 🐶 Sporting organisations that are Dirty Dogs

They definitely done it! I’m not afraid to say as much, I’m not afraid of pap getting sued, cos even if it goes bad for pap, he will be able to console himself, while he’s sitting in prison, with the knowledge that we all had the best intentions.

One point tho, how come Team America: World Police has Juristiction over all this? What has it got to do with them?

When you’re in prison, Bear and I will smuggle in copies of Edward Snowden’s tweets in a stale Dundee cake. And if Bear can master inserting the wireless antenna into his ursine anus, we’ll be able to Skype Julian Assange in the Ecuadorian Embassy.

Re jurisdiction, I think the Aymerrycans are involved because they want to change the name from football to soccer.

Apparently, they have a game called football too - which mainly involves using your hands to catch the ball and high-fiving men dressed like Robocop.

On a more serious note, I wonder if the arrests will alter the imminent election result?

When is the vote, and will these people still be in custody?

I’m hearing/inventing that Blatter done a deal with the Feds, and shopped out a bunch of bros that were planning to vote against him. This is the official Papsweb position + it’s definitely true.

yeah i’ve heard two people mention it on this thread alone so prob must be true. no smoke without lighter.

Following the arrests, the remaining members of FIFA’s executive committee are holding a crisis meeting. 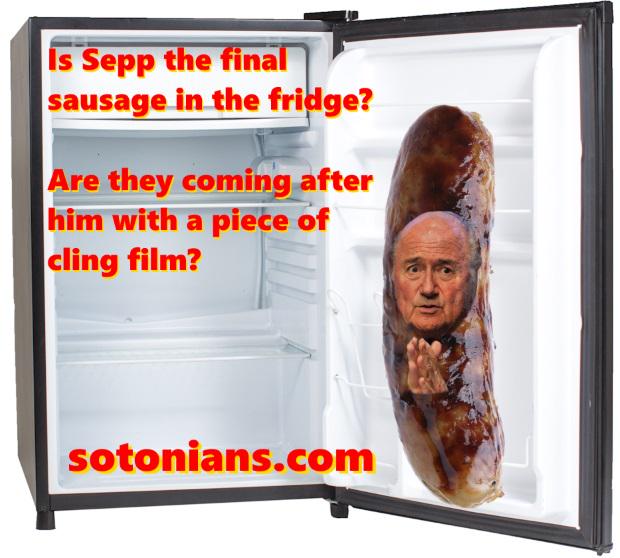 Amazing revelations already today. Funds of $10m were allegedly transferred as a bribe for the South Africa tournament and claims that bribery and improper behaviour have occurred “tournament after tournament” since 1991.

I can’t see how Sepp Blatter is going to secure the FIFA presidency with a straight face. While he has not been indicted today, all of this has happened underneath his watch. At best, it paints the picture of someone that has chosen people very badly and hasn’t been particularly careful about the internal scrutiny of the organisation.

The Home Associations still carry a lot of weight. I think they’ve got to be instrumental in rebuilding whatever comes next. It’s not like there is much choice in the FIFA presidential elections.

This is all talkSPORT are really going on about at the moment. The Attorney General Loretta Lynch is pushing this hard, and worked the case for years prior to her elevation to the AG spot. Background and clout. This could be very interesting.

If they can make this happen, it will be a miracle. God bless America.

'Murica is finally good for something at least…? They really only care about the money they lost by not getting another world cup in the states. Not that this country has any business hosting a world cup anyway. A ragtag group of hipsters, ex-pats and 10 year olds watching Man U on NBC don’t change the fact that almost everyone here hates ‘soccer’.

Oh, and all hail the Blattered Sausage! My new most favourite / disturbing internet thingy I’ve ever seen, so far today.

Meh, the masses don’t understand anything. It’s a cult classic in the making.

Meh, the masses don’t understand anything. It’s a cult classic in the making.

The inspiration actually comes from a classic. It’s one the few decent lines that “Mike the Cool Person” got in the Young Ones. Christopher Ryan got jipped for lines on that show.

I feel like I’m carrying this thread on singlehandedly, either through “replying to myself”, or creating disgusting sausage-based Sepp hybrids that elicit disgust and wonder in equal measure.

One depressing little thing from this left-winger’s perspective was all the talk of sponsor power today. “Ah, FIFA have had it now, because VISA and McDonalds are saying it’s wrong”.

Global Soccer Tournament To Kick Off In America Later This Afternoon

It’s a short read, but worth it as it uncovers an interesting conspiracy theory.

FFS Ohio, it’s not widely known, but The Man’s banning of pap was part of a coordinated attempt to wean him off conspiracy theories.

Now you come along and put his therapy back months.

summer world cup 2015 would be pretty sweet tho! I would be so pumped if they announced impromptu world cup tomorrow!

I am u-turn anyway, i am pro-blatter now, i am going to my local polling station tomoz and vote for him. I admire his fuck-you attitude! I have got no problem with him making a little cheddar on the side. I would be exactly the same if i had his job.