It’s a big topic, especially in this perceptively smaller and connected world. It has driven much of the conflict in the world, past and present. At the same time, it has also been a vehicle for emancipation and free speech. The dialogue we all enjoy now is, in part at least, derived from earlier efforts of religious people to worship in their own way,

It’s place in history briefly alluded to, what place does religion hold in our society today? What’s your position on it?

A sort of non-secular religious poll is up there. I’m not an expert, so let me know if we need more options.

I’m a firm believer that we’re not the highest life form, but dislike like the term “God” and the practice of worship. No problems with being grateful or thankful of what we have, but if there truly was a God I’m damn sure they wouldn’t want or expect lavish places of worship. Not sure that those thoughts fit into any of the original options?

I’ve got a weird relationship with religion meself, Smiler. Grew up around Muslims, so a lot of them would tell you that it wasn’t okay to eat pork (most of my family still don’t), also had Christian education in school, including stories, etc. I’d read most of the bible stories, worked for a company where 1/3 of the staff were from some weird charismatic cult (which finally put me, and many others who worked there, off Christianity for good - they tried recruiting quite forcefully). Went through a stage of being an atheist, and am currently spending a decent portion of matchdays with Hindu friends.

When you’re exposed to that many competing, and in many cases conflicting instances of religion, there’s a tendency to see the whole thing as a bit arbitrary, a bit of the roll of a dice and probably written by people who wanted to make sense of their world with the knowledge they had at the time. I wouldn’t try to separate a man from his faith, but its not really for me.

I’ve voted atheist as that’s what I consider myself to be; however, I’d take issue with your definition. An atheist is one who believes that there is no god, which describes me perfectly. I wouldn’t claim to know that there isn’t a god though - it’s just that, to me, all the evidence suggests that there isn’t. Plus, of course, evey new dicovery about the universe strengthens that view.

Quibbling perhaps, but there you go. I was born to quibble.
~p]

…but if when the whole Cosmos is scaled back and it’s found to be ridiing on the back of a Turtle…where do you go to then?

I’m a bit of a number 4 really. I started thinking about and trying to get my head around the existence of the Artichoke Gall I found appearing on Oak trees where I walk everyday. It appears to be a natural growth on the tree…like an acorn…maybe some kind of fruit or seed but no. It’s neither, it’s the tree’s reaction to a parasitic wasp. Just like an Oak Apple is a wasp gall, (a reaction to another species of parasitic wasp) the Aritchoke Gall Wasp causes the same tree to react in a different way to produce the Artichoke Gall. It’s a fantastic creation…the tree could easily (I imagine) just produced a lumpy callus but it didn’t, it produced this… 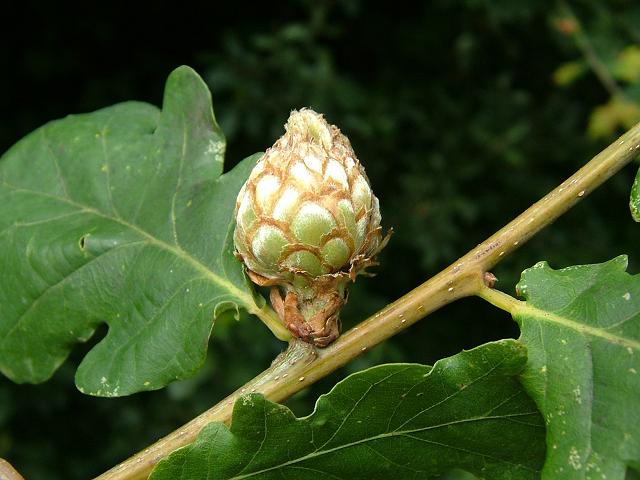 Is this the evidence that everything is God…and God is in everything?

Is this the evidence that everything is God…and God is in everything?

It is evidence of the existence of artichoke galls. You can study the process that makes them, why they are made, and dissect them down to the molecular level. However, once you invoke a god without any evidence for it, you have just given up. (Yes, I know you were asking a question, not making a statement)

Saved me some typing there. Thanks.

Point accepted, answer amended - if anyone voted for None of the above on the basis of my sensationalist answer, lemme know and I’ll allow you to re-vote.

I did say I wasn’t an expert

Haha…yeah I’m just a subscriber to the “isn’t nature wonderful” religion…which includes everthing in the Cosmos. That of course includes all the new things I discover every day…which makes every day fascinating.

I absolutely agree that nature is wonderful. It is astounding! For me, though, it would be less amazing if I attributed it all to a god who just made it because he could. It would take away the wonder in everything, and just concentrate all that awe on a figment of someone else’s imagination.

“Mostly cunts” would be a pretty decent comparison to all the alleged gods, who tend to be “Almost exclusively cunts” I’m not just being flippant there. They are generally a very nasty bunch of extremely naughty deities.

I certainly wouldn’t want to meet the Abrahamic god in a dark alley.

The brilliant and late Christopher Hitchens

I could listen to Hitchens talk on any subject for the rest of time. I’ve heard it said that God took the wrong brother and whilst I didn’t always agree with everything he said, his ability to construct arguments that cut to the absolute essence of the issue was God-like.

My own view is probably best described as atheist.

It’s a tricky one I feel.

I do not personally have any great tie to any religion, and don’t really believe in God. Yes, religion has caused a lot of shit throughout history, but I often find the good it has done is all too easily rushed under the carpet.

its not religion that is the problem, and the heart of most of them the teachings are about love and understanding. It’s people, as Fatso says, that are cunts.

for all the war and conflict under religious banners, some truly horrific slaughters have occurred non-religions banners too. To me this suggest quite strongly that religion isn’t the problem, it’s us.

im sure even with out religion, people would find a reason to do unspeakable things to each other. Heck, just being from a different slab of rock on this planet is enough to invoke feelings of hate in some (seriously just go look at sfw right now), let alone people’s gender, sexuality or whatever you can think of. People will always find ways to hate.

Religion, for better or worse, is behind a lot of the morality that has a bearing on our everyday lives and throughout history has at times helped further our understanding of some things (clearly it has done the opposite of this too) and played large roles in communities all over and was the basis for a lot of early hospitals too. Could it be argued that these things probably would have happened without religion? Yes, that probably is quite likely. But equally, you can say the same about the bad things that occur as a result of organised religion.

greed, hatred, violence are sadly all pet of the human condition. Take away religion, people would still have found ways to carry out so many of the all things thrown at religion.

I’m heartened at reading people’s responses n here, and glad no one has really gone down the “man sat in the clouds route”. Something that is often forgotten is that for the most part, religion was more metaphorical than literal. It’s a pretty recent phenomenon where religious ideologues have started taking religious texts as absolute statements. This is why I fall short of labelling myself an atheist. Mostly due to not wanting to be associated with atheism, which is religion like in its devotion. Acting not much different than religious followers they think so little of.

people like Dawkins and Hitchens have a lot to do with this. For them, mocking religion and religious people is something of a sport. It’s pretty unbecoming, the former has also amassed something of an army of loathsome followers ready to jump all over anyone he happens to point at. Fuck that guy.

people like Dawkins and Hitchens have a lot to do with this. For them, mocking religion and religious people is something of a sport.

It’s more than a sport. It’s their religion.