Fuck sake. Do they not have enough money to hire a professional presenter?

77% of the development time went into it.

In Fantasy Draft mode, you can compete against an AI side managed by Inbetweeners James Buckley…

And then just disapeared.

Brexit is in FM17 due to the British public and their wisdom. WIll make the game trickier, but good for clubs with a good youth system.

3 different scenarios can occur and there is a % chance you’ll get one of them in each game you play.

Here are two of them… 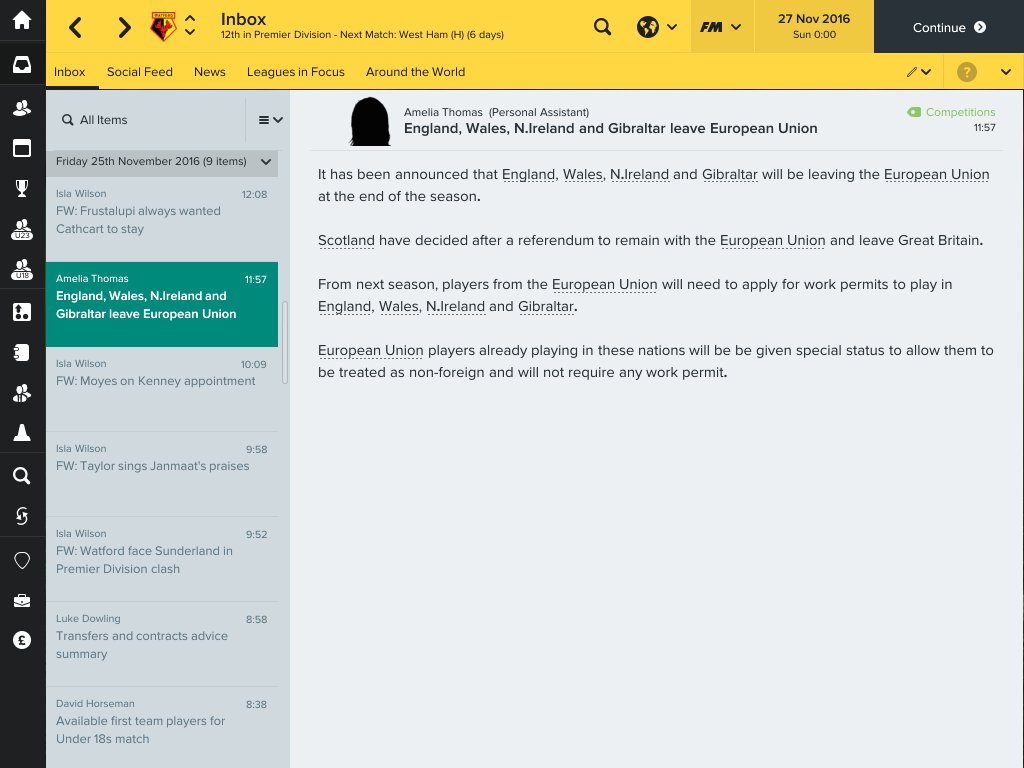 77% of the development time went into it.

And then just disapeared.

Nah, it all went into staff training. 92% allocated to a course called “Presentin’ like a playa”. John Craven runs the course.

I can only assume that having achieved everything, he lacks the basic hunger to help a CEO perform well in a vanity project.

The beta is now live for those that pre-ordered.

The most disturbing thing is that it feels like only yesterday, just before I was off to Uni, that they had released their very first 3D match engine edition. Fucking crazy how time flies. Hopefully its been kinder to me than it has to their presenter!

Bollocks to your Football Manager. We’re going back. Way back. 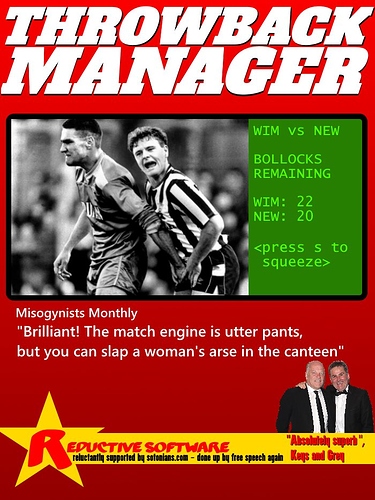 Bought it last night, looks very similar, more of an update patch than a new game. Social media interface is good, graphics improvements are resonable. The interface is 99% the same and I had up-to-date transfers anyway.

The biggest downer on the few hours I gave it last night is that it crashed twice. Hopefully this is sorted by the time the full game is out! I don’t want to have to go back to having to save it after each action like in the early additions.

MLG bound to comment it is due to a fault with my laptop. It is the same lap top I have been playing FM16 and before that FM15 with so should be fine.

hi mlg when is fm2017 coming out for my phone? I am still playing FM2016, and it’s good in some ways, because Juanmi is fkn lethal, but I want to play a new version where Romeu isn’t shite.

Genuinely getting my kicks somewhere else this year. Fair dos, Football Manager is going to remain peerless for years to come in terms of an actual football management game. The Championship Manager series that preceded it was miles ahead of anything else in the genre at the time, and no-one has ever caught up. I don’t think anyone is going to, if we’re talking the sort of raw numbers, cumulative feature accumulation and the army of researchers worldwide.

When Football Manager is eventually unseated, it’ll be a completely different approach that knocks it off its perch, On a personal level, that’s happening already.

After getting to the stage where one feels increasingly guilty about computer game time, I’m not sure I’ve got a football management slot going anymore, especially now that PES and FIFA are kinda sorta providing an alternative. I do have an overall space for football games though. Have done since Sensi. PES Master League is my new star signing though.

I know they’re completely different kinds of game, united only in theme and a shared world they’re both seeking to emulate. I know that PES is never going to model the complexities of Football Manager’s transfer system and that even modified to the absolute hilt, it’s still lacks the scope, scale or authenticity of the world FM conjures. I’m finding it hard to care, because PES does things FM never can.

That paradigm shift in Football Management games? I reckon it comes the moment you can truly assess what’s going on on pitch, seeing your player’s strengths and weaknesses rendered as something you can visually process, rather than a number between 1 or 20 and a dice roll. FIFA and PES have similar numbers driving player performance. It’s the depiction that makes the difference. FM’s match engine doesn’t tell me that Yoshi will make one mistake per game, or that Clyne has a great first touch. With PES especially, you feel it.

I know why I win or lose in PES. It’s usually down to me. Perhaps FM’s biggest problem is that apart from quality of player, I have no fucking idea why that’s happening, or whether that’s down to me or not. I normally end up searching the 'net for recommended players, tactics - the whole shooting match. I effectively end up playing each season on a min-maxed auto-pilot. The sheer amount of time I’ve spent on it means I’ve no compunction about reloading.

I did end up buying the last game in a Steam sale, but the days of buying FM full price are over. I’d rather do something I understand, enjoy, and makes me better at something, even if it does mean international superstars sign for Southampton because they don’t realise just how banging the Derby club scene is.

Piece of piss, this